All Collections
My data
Collection
How are the readings recorded?

How are the readings recorded?

The way the readings taken from Sencrop stations are measured comes from considering the theory and scientific rigor as much as the experience of our users. New functions are constantly under development to improve their precision, coming as close as possible to the reality and problems faced by farmers.

This way, if one of the three sensors stops working, it is easy to identify the damage, and the information transmitted to the user then comes only from the other two. In general, if a sensor stops working (perhaps due to a water droplet, or overly high humidity), it starts working normally again after a few hours. 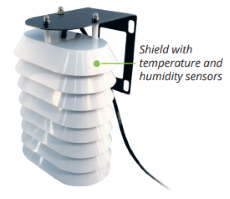 The three sensors are positioned within a slatted cover that was designed and engineered by Sencrop. Its purpose is to optimize exchanges with the outside world (maximize air circulation) without compromising the measurements taken. The slatted cover mainly provides protection from bad weather, insects, and spiders.

The way the stations measure rainfall has been engineered for optimum precision. The precipitation falls into the collector, whose surface area is within the range recommended by the World Meteorological Organization (World Meteorological Organization, 2018). The angle of the collector has been designed to avoid raindrops rebounding out of the receptacle.

The shape of the collector has also been carefully thought out so that the measurement of the rain is as little disturbed by the wind as possible. Inside the collector, there is a filter to protect the measuring system from any outside elements and to allow it to be cleaned quickly and easily. 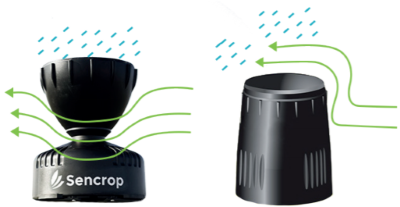 The rain gauge utilizes a tipping double-bucket system. Once the water has passed through the filter it reaches the double bucket. A small amount of water is sufficient to set the bucket tipping, adding to the rain meter.

In addition to simply measuring the rain, several algorithms are utilized to correct certain discrepancies between the value measured by the apparatus and the true value. One algorithm in particular compensates for any water that has come to rest on the surface of the collector and/or has evaporated. Even tiny amounts of rain are taken into account.

The Sencrop wind gauges provide information on gusts of wind. The value given is the maximum wind speed over a period of one second. The gust is not simply the highest speed measured over a long period of time, but a true gust recorded over one second.

The concept of the Leafcrop wetness detector rests on biomimicry, i.e. the imitation of the natural world by technology. The sensor has been designed to provide values as close as possible to the reality experienced by a tree or vine stock. The wetness sensor is made in the shape of a leaf. The leaf wetness corresponds to the quantity of free water on the surface of the leaf; in other words, whether it is damp or not. This data is fundamental in the prevention and defense against disease, particularly fungal (mildew, scab, etc.). 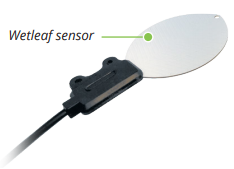 A research project has been conducted over four months on the topic of ‘Leaf Wetness Duration Modelling Using Adaptive Neuro Fuzzy Inference System’. It was observed that the main difference between the true duration of wetness and what was measured by the Leafcrop was 7 minutes and 30 seconds. This will make it the most accurate leaf wetness indicator on the market at the present time. 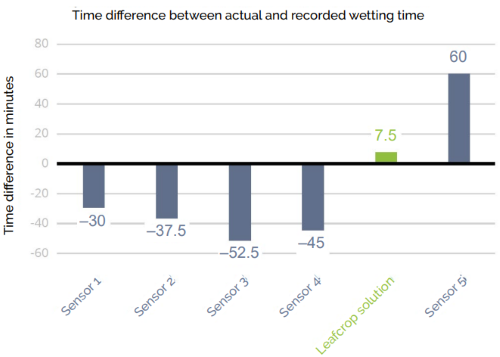 Additionally, the use of an electric field means distinctions can be made between different wetness thresholds. These thresholds should be set by the end user, according to his/her experience and the type of crop. They correspond to higher or lower wetness of the foliage overall.

So, the sensor is placed among the foliage in the spot where the user wishes to be kept informed of conditions, following the positioning recommendations given in the article ‘How and where should I install the various elements of my Leafcrop station?’, available in the FAQs. The humidity and temperature sensors may also be placed in the middle of the foliage, allowing the user to take measurements right on the spot where disease might break out, rather than outside the orchard or plot.

Did this answer your question?